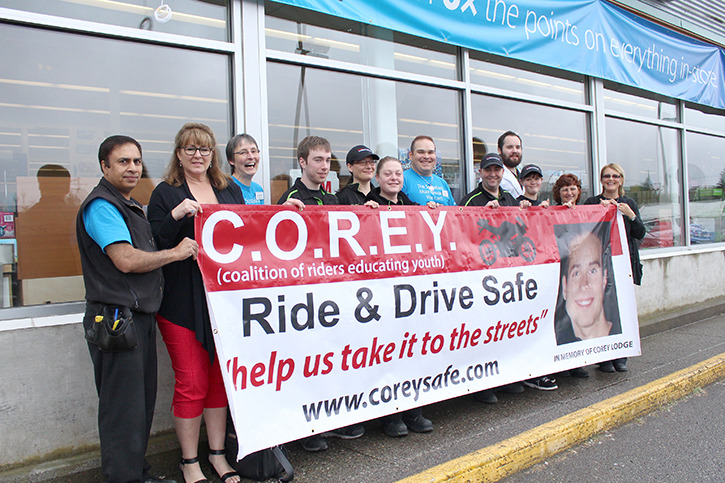 t has been nearly 11 years since her son died in a motorcycle accident but Denise Lodge still continues her mission to prevent the same tragedy from affecting other families’ lives.

With the help of Save On Foods, Lodge’s message of education and hope will be coming to Prince Rupert in the 2016-2017 school year.

At the end of the day all we want is for you to come home safe.” Lodge said in an emotional plea during a recent presentation in Kitimat.

In 2005, her two boys were living on Vancouver Island. Her oldest son, Corey, was 21 years old at the time, when he purchased his Super Sport street bike with a 1000cc engine. Less than 24 hours after receiving his Learner’s Motorcycle Driver’s Licence and purchasing his new Super Sport bike with after-market enhancements, he took it on the Malahat Highway and lost control of the bike, crashing into a rock wall.

She had no idea that he had purchased a motorcycle nor did Corey’s girlfriend, with whom he was saving money to buy a house, and who was in the hospital for an operation, when the accident happened.

After his death she organized the C.O.R.E.Y (Coalition of Riders Education Youth) to bring awareness to rider and driver safety. Lodge is also lobbying the B.C. government to introduce better safety regulations. A new law came into effect in June 2012 making motorcycle riders and passengers wear helmets that met specific industry standards. Skull caps and other novelty helmets would not meet the regulation code. New seating requirements were also issued with increased fines for reckless driver behaviour.

Lodge is also pushing for graduated licencing for motorcycles that is along the same lines as the graduated licencing program for a car. In the current system, if you hold a licence to drive a car, it will only take that driver to write the motorcycle test and in 30 days have a full licence.  You are not required to get any training. So with no skills you are riding on the streets with all the other traffic.

“Just because you have your driver’s licence doesn’t give you the qualifications to fly a plane.”

Her request for a new licencing system made its way to the Ministry of Justice and Attorney General Shirley Bond. In 2012, Bond stated that the province intended to move forward with a graduated licencing program GLP-M, but it still hasn’t come into fruition.

“We’ve been waiting 11 years for the government to go forward with this and every year more people die,” she said. “I keep getting that same letter from the government, that it is one of their priorities.

“Well, that priority list that we are on, as it sits, has already cost more than 400 deaths.

“That’s why we have taken this route and doing presentations for the high school students grades 9-12. To give them an introduction to Safer Motorcycling and to Ride and Drive Safe.  So they know the risks and things they can do to minimize those risks. As well as to empower them to make the right choices.

At the presentation to be made in Prince Rupert, Lodge will be telling the story of her son but, as importantly, joining with law enforcement officials to offer tips on the best ways for riders and passengers to protect themselves, such as wearing abrasion resistant clothing and purchasing a bright coloured helmet over a solid black one for higher visibility.

At the end of the recent presentation in Kitimat, Lodge played a song one of Corey’s friends recorded for him. The line: “I miss you man, I never got to say goodbye” drives her message home into the hearts of anyone listening just a little deeper.

An important message and an eye-opener for any parent of a young driver or any new motorcyclist.

From June 29 to July 3, visit the Prince Rupert Save-On Foods to learn how you can win points and help drive Lodge’s message to young riders and drivers home.