An Introduction to Riding & Driving Safe

Like you, he was loved deeply by his friends and family. 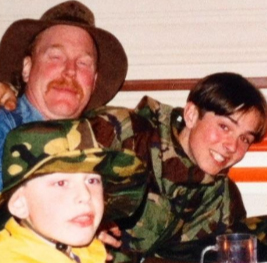 “This picture of Corey on the right was taken during one of our many camping trips that our two families loved to do together. Our boys, who were 10 years younger than Corey, idolized and looked up to Corey as a cool, big brother!”

As a big brother,
Corey always looked after his
little brother Jeremy.

“Since I was first born you were always looking out for me. Even though you threw hockey pucks at me in the house and we had multiple fights. I could never ask for a better brother. I can’t believe it’s been 10 years. It sure doesn’t feel like it. Where has the time gone? I wish you were still here. I will try to continue to live the life you dreamt of.”

Just before he died, Corey was planning to make a down payment on a house with his girlfriend, Jenny.

On Thursday, Jenny was in the hospital for surgery.

Corey was going to bring pink tulips to the hospital, Jenny’s favourite flowers.

Because Corey’s life was cut short, I’m here to talk to you about the very real risks you take as a motorcyclist, and the ways you can help protect yourself from tragedy – in the hopes that your loved ones won’t suffer the same loss we did.

Why CoreySafe has come to fruition

Corey on March 2nd wrote his Motorcycle knowledge Test.
That same day he bought himself a High Speed Super Sport Bike with after-market enhancements.
Less than 24 hours later he died on Vancouver Islands Mallahat Hwy, not being able to navigate a turn.

Because of his accident we are sharing his story … To bring Awareness about Safety for both Riders and Drivers. That Safety gear is distinctive for both on Road and off road.

If you never become a Rider, then with this information you will know some of the Road Hazards that a Motorcyclist face everyday and in hopes that this brings awareness to all aspects of Riding and Driving!

We provide presentations on road safety to empower and create change. This being an introduction to Riding and Driving Safe that this knowledge will be useful, so they can make informed choices! As we Can Not Change the Past, but we Can Change the Future.
“Help Us Take It To The Streets”